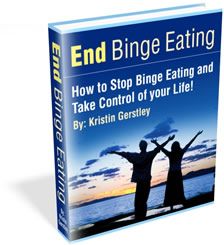 The behavior at the center of the disorder, binge eating, has been progressively redefined. A priority has been to separate binge eating from mere indulgence and everyday overeating. Accordingly, two features of a true binge have been identified: consumption of unusually large amounts of food and an aversive sense of lack of control over eating. The size of binges varies but is typically between 1000-2000 kcal.

Diagnostic schedules (such as DSM-IV and ICD-10) agree on three features that must be present in someone with bulimia nervosa. The first is the presence of binge episodes. Second, the person must use compensatory behavior to control body shape or weight. The most common is self-induced vomiting, but these strategies also include use of laxatives or diuretics, excessive exercise, and extreme dieting or fasting. Third, the person must show overconcern with body weight and shape. Importantly, the person should not be of low body weight, in which case a diagnosis of anorexia nervosa would be made.

The tightening of these formal diagnostic criteria has had the consequence of reducing misdiagnosis and prevalence but has increased the numbers of those with atypical eating disorders. Failing to exhibit one or more of the key diagnostic features, such as an insufficient frequency of binge eating, is classified variously as atypical, partial syndrome or 'eating disorders not otherwise specified' (EDNOS). It is also useful to note that the diagnostic criteria for another eating disorder, binge eating disorder (BED), are included in DSM-IV, albeit for research purposes. The key difference between BED and bulimia nervosa is the absence of the extreme compensatory behaviors that follow the binge. Those with BED are less likely to be restricting their eating but more likely to be overweight and to be older (most presenting between ages 30 and 50).

We have all been there: turning to the refrigerator if feeling lonely or bored or indulging in seconds or thirds if strained. But if you suffer from bulimia, the from time to time urge to overeat is more like an obsession.