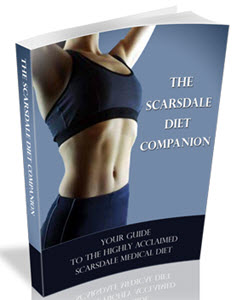 T arnower states that he developed the diet at the Scars-dale Medical Center in suburban, affluent New York when he urged his cardiac patients to "take off that unhealthy flab" (Tarnower and Baker 1980: 2). His diet suggestions came out of his general and cardiac practice, but clearly followed the growing health and diet consciousness of the middle-class, suburban "baby boomer" generation, who by the i970s were entering into middle age. Successful diet books could sell millions of copies, and diet books that were labeled "medical" and linked with images of affluence (Scarsdale) were programmed for success.

Tarnower came into a bit of unexpected publicity in 1978 when an article in the New York Times Magazine announced that it was "but six weeks to bikini season ...

The Complete Scarsdale Medical Diet was on the New York Times hardcover bestsellers' list for forty-nine weeks, selling 711,100 copies. The paperback spent eighty weeks on the paperback list and as of i98i had sold 5,309,000 copies. It is of little wonder given the pitch of the volume. The testimonies read like the code of the modern diet culture with its focus on the female body, "my husband keeps saying how wonderful it is to have a slim, attractive wife again, but he can hardly match my own delight about the 'new' me" (Tarnower and Baker 1980: 5). Another happy woman said, "I was never fat until change of life, getting older, getting heavier. I had no discipline, always good intentions that weren't enough. I went on your diet—IT WORKED! Thank you" (Tar-nower and Baker 1980: 6). The book consisted of success stories of people who lost weight on the Scarsdale Diet, a variety of recipes, and Tarnower's views on eating, weight, and health.

Tarnower's suggestions follow the "fat is the danger" model, so well known from the nineteenth century. Meats are allowed, but they must be lean. The breakdown of the diet is 43 percent protein, 34.5 percent carbohydrates, and 22.5 percent fat (CBS News Online 2004). Only three meals per day are allowed on this diet and snacking is prohibited. Another component of the diet is using herbal appetite suppressants and artificial sweeteners, which are intended to speed the weight-loss process. Water is also an important component of this diet in order to cleanse the body and help lose weight. Tarnower's is a low-calorie, 1,000-calorie-per-day diet that lasts from seven to fourteen days. The appealing part of the diet at the time of publication was that it assured people would lose weight fast. More specifically, this meant losing 20 pounds in two weeks.

Many people had problems with the diet because it made them feel weak due to the low caloric intake. In addition, due to the large amount of total protein, including meat, an unbalanced amount of fat intake is likely. This diet does not involve exercising to help lose weight.

It advises that no one over forty years of age should engage in strenuous exercise unless it has always been a central part of his or her daily routine (Weight Loss Institute).

Tarnower was murdered in 1980 by his mistress Jean Harris, whom he thanked in the preface to the Scarsdale Medical Diet for her "splendid assistance." In fact, her lawyer argued during her trial that she had been the book's "primary author" (Alexander 1983: 158). Her trial was one of the salient proofs of the importance of celebrity in the dieting culture, and, one may add, the fleeting fame of such celebrity diets. Since Tarnower's death, the Scarsdale Diet has become less popular. The Diet, Home Remedies for Scar Removal, How to Cheat on Your Diet and Still Lose Weight, Tarnower, Scarsdale Medical, Scars Dale Medical